Archaeologists working at Pompeii say they have found the remains of a man who survived the initial explosion of Mount Vesuvius in A.D. 79 — but was crushed by a massive rock as he attempted to flee a deadly cloud of gases, ash and rock.

The skeleton’s remains are in what the Pompeii archaeological site calls a “dramatic position” — with a large rectangular stone embedded in the upper torso.

“Initial observations would appear to indicate that the individual survived the first eruptive phase of the volcano, and subsequently sought salvation along the alley now covered in a thick layer of lapilli,” or rocks ejected by the volcano, the site said in a statement released Tuesday.

The man was on top of the layer of rocks, which was a full story high by that point. The dense cloud of gas and stone, called a pyroclastic flow, knocked him backward, the archaeologists say.

“A formidable stone block (perhaps a door jamb), violently thrown by the volcanic cloud, collided with his upper body, crushing the highest part of the thorax,” they explain.

The skeleton’s head has not been located, but archaeologists believe it is probably crushed beneath the stone block.

The man was an adult, over 30 years old, who had a bone infection that would have caused him to have trouble walking and may have interfered with his escape, archaeologists say. 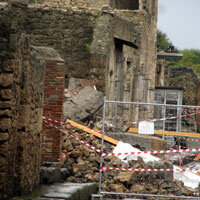 A Collapse In Pompeii Highlights Neglect In Italy