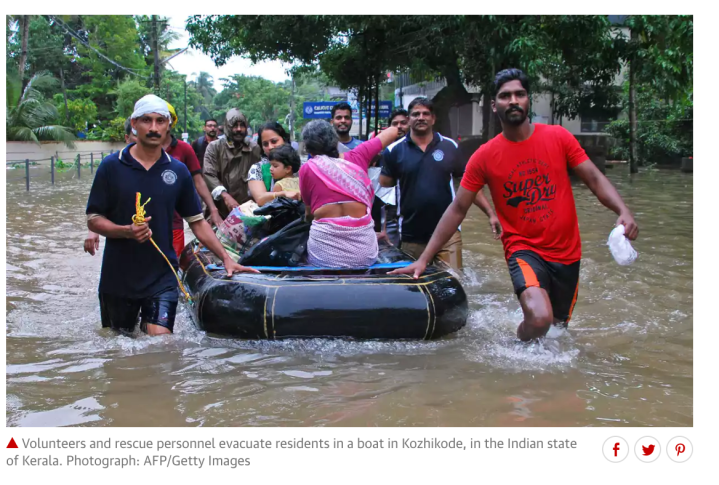 The death toll from floods in the southern Indian state of Kerala has jumped to 164 and could grow further, with more rain predicted and thousands of people still awaiting rescue.

Roads are damaged, mobile phone networks are down, an international airport has been closed and more than 150,000 people have been left homeless after unusually heavy rain this month caused the most damaging floods in Kerala in a century.

The state chief minister, Pinarayi Vijayan, has described the crisis as “extremely grave”, and the official death toll leapt on Friday from 86 to 164. “Around 100 people died in the last 36 hours alone,” a state official said.

North and central Kerala have been worst hit by the floods. Thousands of military and civilian boats and aircraft have been mobilised for the rescue effort.

India’s prime minister, Narendra Modi, said on Friday he had discussed the situation with Vijayan, as more troops and rescue workers were deployed across Kerala. “Later this evening I will be heading to Kerala to take stock of the unfortunate situation,” Modi said on Twitter.

The state, famed for its palm-lined beaches and tea plantations, is always pummelled by the annual monsoon, but this year’s deluge has swamped thousands of homes and forced people into more than 1,300 relief camps.

Vijayan’s office posted a fresh warning on Friday. “Alert: all districts apart from Kasargod are under red alert … heavy rains may affect these 13 districts. Everyone please be cautious,” his office tweeted.

People caught up in the floods have been posting desperate appeals on social media, sometimes including their GPS coordinates in the post.

“My family and neighbouring families are in trouble with flood in Pandanad nakkada area in Alappuzha,” Ajo Varghese said in a viral Facebook post. “No water and food. Not able to communicate from afternoon. Mobile phones are not reachable and switch off. Please help … No rescue is available.”

Another man in flood-hit central town of Chengannur posted a video of himself neck-deep in water in his home. “It looks like water is rising to the second floor,” he says. “I hope you can see this. Please pray for us.”

A state official said a breakdown of the communication systems was making it difficult to reach people who may be in urgent need in the worst-affected areas.

The government said 10,000km (6,000 miles) of Kerala roads had been destroyed or damaged and tens of thousands of homes partially or completely damaged.

The gates of at least 34 dams and reservoirs across the state have been opened in the last few days as water levels reached danger levels. The international airport in city of Kochi will remain shut until at least 26 August.