I have lived nearly all my life in California, and my love for this place and its people runs deep and true. There have been many times in the past few years when I’ve called myself a California nationalist: Sure, America seemed to be going crazy, but at least I lived in the Golden State, where things were still pretty chill.

But lately my affinity for my home state has soured. Maybe it’s the smoke and the blackouts, but a very un-Californian nihilism has been creeping into my thinking. I’m starting to suspect we’re over. It’s the end of California as we know it. I don’t feel fine.

It isn’t just the fires — although, my God, the fires. Is this what life in America’s most populous, most prosperous state is going to be like from now on? Every year, hundreds of thousands evacuating, millions losing power, hundreds losing property and lives? Last year, the air near where I live in Northern California — within driving distance of some of the largest and most powerful and advanced corporations in the history of the world — was more hazardous than the air in Beijing and New Delhi. There’s a good chance that will happen again this month, and that it will keep happening every year from now on. Is this really the best America can do?

Probably, because it’s only going to get worse. The fires and the blackouts aren’t like the earthquakes, a natural threat we’ve all chosen to ignore. They are more like California’s other problems, like housing affordability and homelessness and traffic — human-made catastrophes we’ve all chosen to ignore, connected to the larger dysfunction at the heart of our state’s rot: a failure to live sustainably.

DEBATABLE
Agree to disagree, or disagree better? Broaden your perspective with sharp arguments on the most pressing issues of the week. Sign up here.

Now choking under the smoke of a changing climate, California feels stuck. We are BlackBerry after the iPhone, Blockbuster after Netflix: We’ve got the wrong design, we bet on the wrong technologies, we’ve got the wrong incentives, and we’re saddled with the wrong culture. The founding idea of this place is infinitude — mile after endless mile of cute houses connected by freeways and uninsulated power lines stretching out far into the forested hills. Our whole way of life is built on a series of myths — the myth of endless space, endless fuel, endless water, endless optimism, endless outward reach and endless free parking. 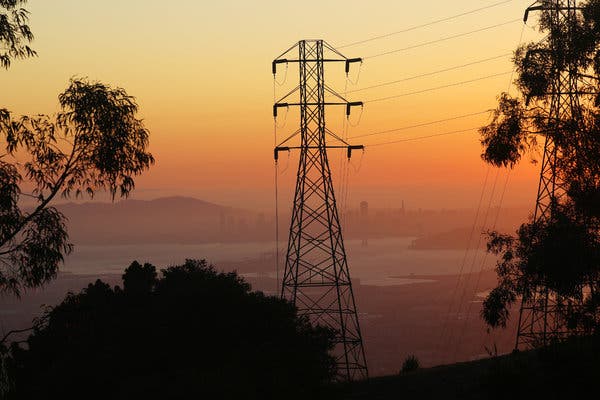 One by one, those myths are bursting into flame. We are running out of land, housing, water, road space and now electricity. Fixing all this requires systemic change, but we aren’t up to the task. We are hemmed in by a resentful national government and an uncaring national media, and we have never been able to prize sustainability and equality over quick-fix hacks and outsized prizes to the rich.

All of our instincts seem to make things worse. Our de facto solution to housing affordability has been forcing people to move farther and farther away from cities, so they commute longer, make traffic worse and increase the population of fire-prone areas. We “solved” the problem of poor urban transportation by inviting private companies like Uber and Lyft to take over our roads. To keep the fires at bay, we are now employing the oldest I.T. hack in the book: turning the power off and then turning it back on again. Meanwhile, the rich are getting by: When the fires come, they hire their own firefighters. (Their gardeners and housekeepers still had to go to work, though.)

Does all this sound overdramatic? You might point out that if it seems like dystopian apocalypse in California, it’s because it has always felt like dystopian apocalypse in California. The California of Joan Didion, Charles Manson and Ronald Reagan was no picnic; nor was the California of Pete Wilson, Rodney King or Arnold Schwarzenegger. California has always been a place that seems to be on the edge and running on empty, and maybe the best you can ever say about it is, hey, at least we’re not Florida.

But this time it’s different. The apocalypse now feels more elemental — as if the place is not working in a fundamental way, at the level of geography and climate. And everything we need to do to avoid the end goes against everything we’ve ever done.

The long-term solutions to many of our problems are obvious: To stave off fire and housing costs and so much else, the people of California should live together more densely. We should rely less on cars. And we should be more inclusive in the way we design infrastructure — transportation, the power grid, housing stock — aiming to design for the many rather than for the wealthy few.

If we redesigned our cities for the modern world, they’d be taller and less stretched out into the fire-prone far reaches — what scientists call the wildland-urban interface. Housing would be affordable because there’d be more of it. You’d be able to get around more cheaply because we’d ditch cars and turn to buses and trains and other ways we know how to move around a lot of people at high speeds, for low prices. It wouldn’t be the end of the California dream, but a reconceptualization — not as many endless blocks of backyards and swimming pools, but perhaps a new kind of more livable, more accessible life for all.

But who wants to do all this? Not the people of this state. Sure, we’ll ban plastic bags and try to increase gas-mileage standards (until the federal government tries to stops us, which of course it can, because our 40 million people get the same voting power in the Senate as Wyoming’s 600,000).

But the big things still seem impossible here. In a state where 40 years ago, homeowners passed a constitutional amendment enshrining their demands for low property taxes forever, where every initiative at increasing density still seems to fail, where vital resources like electricity are managed by unscrupulous corporations and where cars are still far and away the most beloved way to get around, it’s hard to imagine systemic change happening anytime soon.

And so we muddle on toward the end. All the leaves are burned and the sky is gray. California, as it’s currently designed, will not survive the coming climate. Either we alter how we live here, or many of us won’t live here anymore.